SMYRNA — Mark Jacobson got his wife, Rhonda, to attend Thursday morning’s meeting of the Smyrna Area Council under false pretenses, but for a very good reason.

“I told Rhonda that we were presenting a gift to (Smyrna Mayor) Max Bacon ... She didn’t have a clue,” Mark Jacobson said.

But it was his wife who ended up the recipient of an award — she was named this year’s Smyrna Citizen of the Year by the Smyrna Area Council of the Cobb Chamber of Commerce. 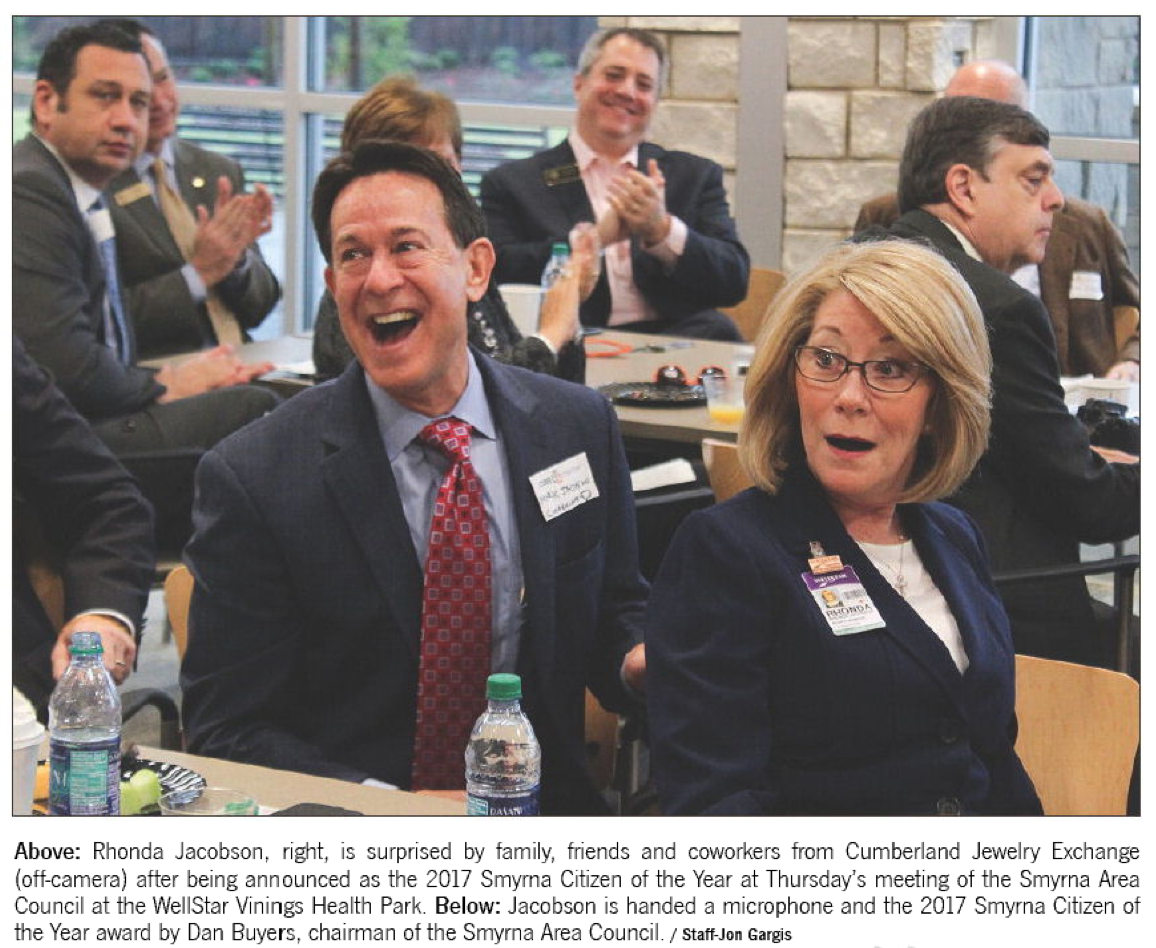 “It’s so fitting that we’re giving this today at the (WellStar) Vinings Health Park. Rhonda gives back a lot to WellStar, to the health system, she’s on the council of leadership for this health park,” said Dan Buyers, chairman of the Smyrna Area Council, in his introduction of Jacobson as the award’s recipient. “Outside of WellStar, she gives so generously of her time.”

Jacobson, who co-founded Cumberland Diamond Exchange with her husband and serves as vice president of human resources and graduate gemologist of the Cumberland Boulevard business, said she was shocked by the honor and surprised by the family members, friends and staff of the business who revealed themselves after she was announced as the award winner.

“I’m still shaking a little bit, because you just don’t feel like you can do enough — you’re giving back to the people that need our help,” Jacobson said after the council meeting. “You’ve got to give up your time, your talents and your financial resources, and you give all three of them until it hurts, because then you can almost feel like you’re giving enough.”

Her involvement in the community includes service as a member of the WellStar Foundation Board of Trustees and as a board member for liveSAFE Resources, which runs the only domestic violence shelter in Cobb County. She is also chair-elect of liveSAFE.

“She just has a servant’s heart,” said Holly Tuchman, the nonprofit’s CEO and executive director, who was among those who joined Jacobson after the announcement was made.

Jacobson, she said, has also been a past honoree and a sponsor of the organization.

“She was surprised (by this award), but we weren’t — she’s very deserving,” Tuchman added.

Jacobson said in addition to liveSAFE and the WellStar Foundation, her other top causes she supports include the SafePath Foundation and Shepherd’s Men, a group that uses long-distance runs to raise money for resources aimed at preventing veterans from committing suicide.

This spring, Cumberland Diamond Exchange donated $2,200 toward the Shepherd’s Men 2017 run, supporting the treatment of PTSD and traumatic brain injury at Shepherd Center in Atlanta.