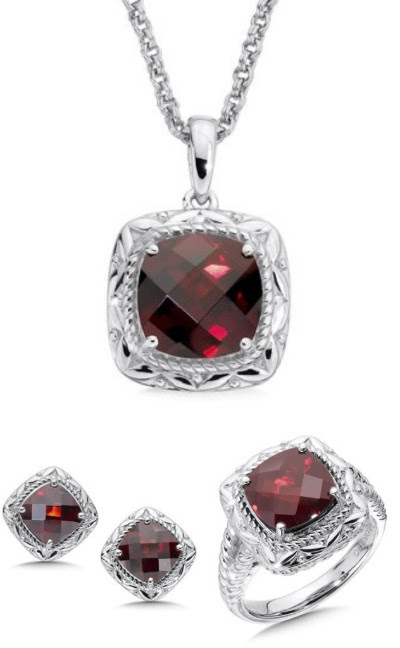 The name "garnet" is derived from the Latin "granatus" meaning "pomegranate" because the crystals resemble the red color and seed-like form of a pomegranate. Most people think of garnet as a red gemstone but it actually exists in all kinds of colors including: black, many shades of red and green, and even colorless.

The most expensive garnet is the brilliant green variety called demantoid (diamond like), which is an emerald shade and exceeds the diamond in fire or dispersion. The finest of these garnets are found in the Ural Mountains, however they are very rare.

Garnet is regarded as the gem of faith, constancy, and truth. It was also believed to possess many healing powers. At one time garnet was ground into a powder and used as a dressing for a wound, for red garnet was said to relieve fever, and yellow garnet was the prescription for jaundice.

Garnet was also worn as an amulet for travelers, as it was said to protect and preserve honor and health, cure the wearer of all diseases, and guard him against danger during a journey. All of these powers were said to double for people born in January.

Garnet is commonly found as a small pebble in a stream, where the igneous and metamorphic rocks that contain them have weathered away. They're found in many places around the world, including North and South America, Australia, India, Asia and Spain.