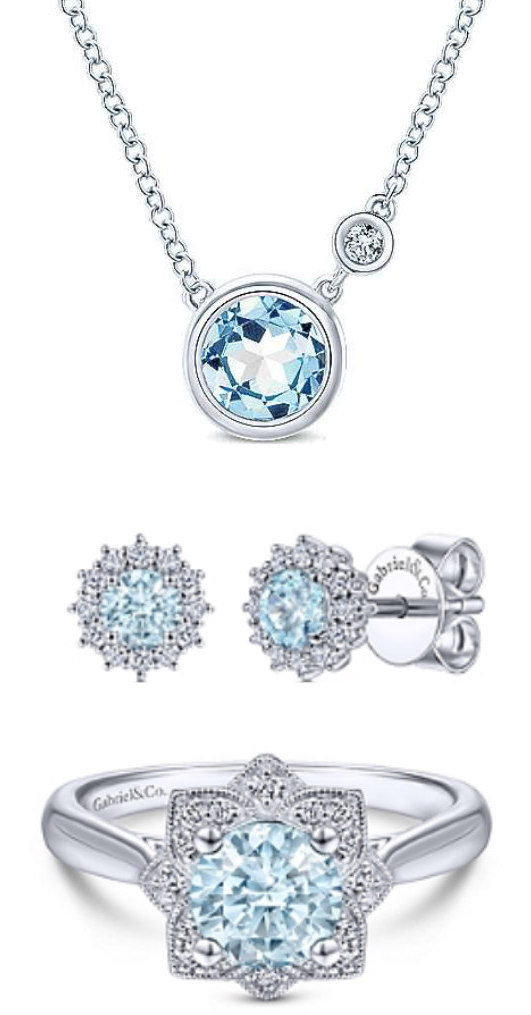 March is one of the months with multiple birthstones. The March birthstones are:

Aquamarine has long been considered the symbol of:

The name Aquamarine was derived by the Romans, "aqua," meaning water, and "mare," meaning sea, because it looked like sea water.

Aquamarines vary in color from deep blue to blue-green of different intensities, caused by traces of iron in the beryl crystal. Naturally occurring deep blue stones are the most prized because they are so rare. The best Aquamarines have great transparency and brilliance and often come in large crystals. In 1910 an Aquamarine crystal was found in Brazil that weighed 243 pounds and was so transparent that objects could be seen through its long dimension of nineteen inches.

Aquamarines were believed to have originated from the jewel caskets of sirens, washed ashore from the depths of the sea. They were considered sacred to Neptune, Roman god of the sea. This association with the sea made it the sailors' gem, promising prosperous and safe voyages, as well as protection against perils and monsters of the sea.

Aquamarines are mined principally in Brazil. In the US the aquamarine was given an enormous boost in popularity in 1906 when President Theodore Roosevelt's daughter, Alice Roosevelt Longworth of "Alice Blue Gown" fame, was given a beautiful heart-shaped Aquamarine by Vice President William Howard Taft as a wedding gift.

Bloodstone is a form of the abundant mineral quartz. The color of Bloodstone is dark green Chalcedony dotted with bright red spots of iron oxide. This particular form of quartz, known as cryptocrystalline quartz, exists as a mass of tiny quartz crystals formed together in large lumps that show no external crystal form, yet each of the component crystals that make up the mass is a genuine crystal.

In the Middle Ages, Bloodstone was believed to hold healing powers, particularly for stopping nosebleeds. Powdered and mixed with honey and egg whites, it was believed to cure tumors and stop all types of hemorrhage. Ancient alchemists used it to treat blood disorders, including blood poisoning and the flow of blood from a wound. Bloodstone was also believed to draw out the venom of snakes.

Bloodstone can be found either embedded in rocks, or as pebbles in riverbeds. The best sources of this stone are India, Brazil, the US, and Australia.