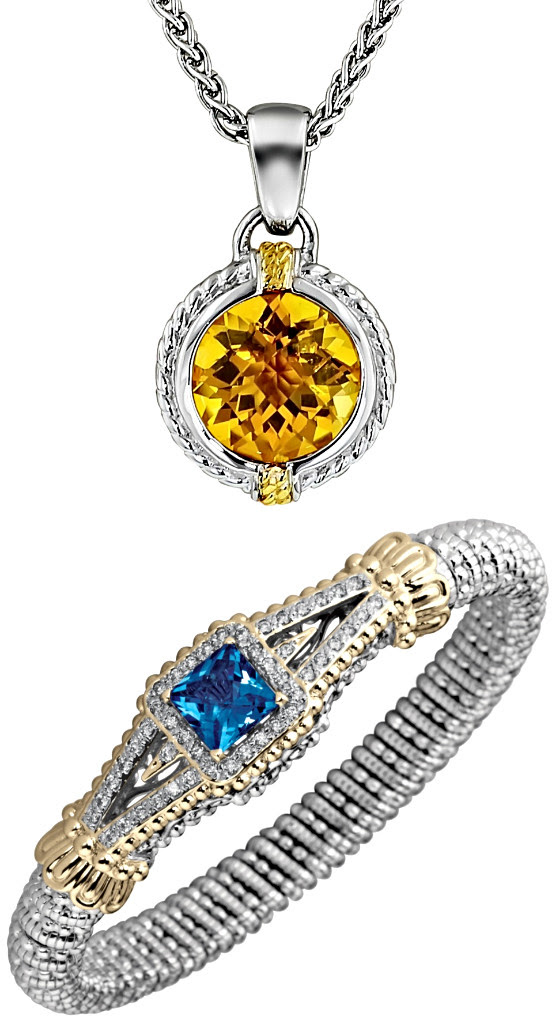 The birthstones for November are:

Citrine is sometimes called the "success" stone because it promotes success and abundance. It also enhances:

Citrine was named after the French word "citron," meaning lemon. Many Citrines have a bright yellow color, but also include gold, orange, and brown shades of transparent quartz. Although the darker orange colors of Citrine have generally been the most valued color, in modern times, many people prefer the bright lemony shades which mix better with pastel colors.

Sometimes you will hear Citrine referred to as topaz quartz, which is incorrect. This name was used in the past in reference to the color, which is sometimes similar to the color of topaz. Since Topaz is a separate mineral, this type of name can be confusing and should not be used.

Most Citrine on the market is mined in Brazil and starts out as amethyst, which is then heated to turn its color to gold. It is important to keep citrine jewelry away from prolonged exposure to strong light or heat. With this precaution, Citrine jewelry will last for many generations.

The second birthstone for November is Topaz, which is believed to:

Topaz occurs in a range of magnificent colors – blue, pale green, varying shades of yellow, pink, red, brown, and even black. What is interesting is that in its pure form, Topaz is a colorless stone. Red and some pink Topaz get their colors from chromium that is substituted for aluminum in the crystals. Most of the other colors occur due to minor element substitutions and defects in the crystal.

With the clarity, beautiful colors, and hardness of Topaz, it is ideal for jewelry such as:

Pure topaz, when brilliantly cut, can often be mistaken for a diamond. Brazil is the largest producer of Topaz, but it can also be found in Russia, the Ukraine, Pakistan, Scotland, Japan and Sri Lanka. In the United States, Topaz has been found in Colorado and California.